175 years of the Cunard shipping line – in pictures

As Cunard marks the 175th anniversary of its formation with a special sailing display by three of its liners in Liverpool, these pictures offer a glimpse of how travelling by ship has changed over time 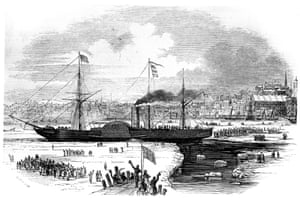 January 1847The Cunard Line’s first transatlantic liner Britannia leaves Boston, Massachusetts, in 1847. It made its first transatlantic voyage in 1840, travelling from Halifax, Nova Scotia, to Liverpool in 12 days and 10 hours. Charles Dickens sailed to America on the Britannia in 1842, but suffered badly from seasickness and decided to make the return voyage on board a sailing vessel 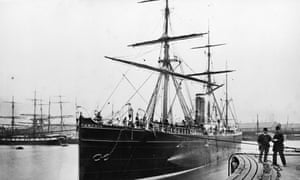 January 1895One of the Cunard Line’s steamships, the SS Parthia, at Liverpool Docks. 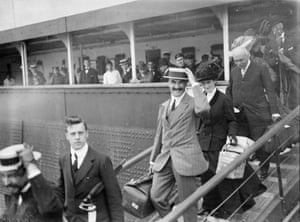 August 1909Passengers disembarking from the Cunard liner RMS Mauretania onto a tender at Fishguard, Pembroke. 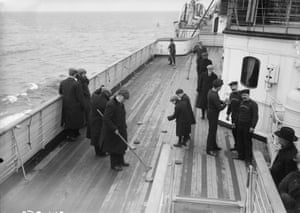 June 1912Saloon passengers enjoy a game of shuffleboard on the deck of the RMS Lusitania. It was torpedoed and sunk by a German U-boat on 7 May 1915. 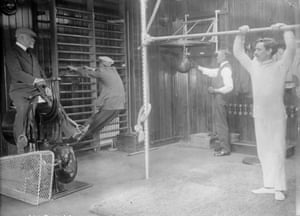 June 1912Passengers working out in the gym of the RMS Franconia, which was destroyed by a U-boat in 1916. Among the equipment is a punchbag and early version of an exercise bicycle. 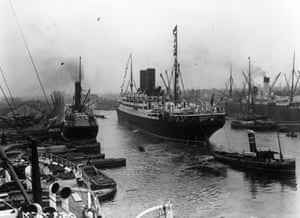 August 1913The RMS Andania, built for Cunard’s London-Canada, arriving in the Surrey commercial docks. It was torpedoed by a U-boat in 1918. 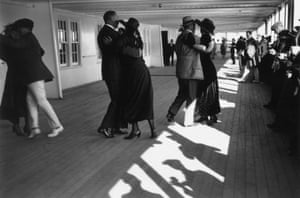 September 1922Passengers dancing on the promenade around the deck of the RMS Aquitania upon her arrival at dock. It survived both world wars, returning to passenger service after each. 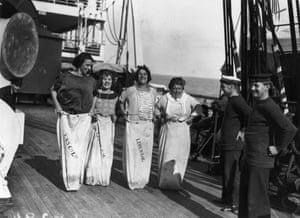 July 1923Four ladies compete in a sack race on the deck of the Cunard liner RMS Berengaria, watched by a couple of bemused sailors. The ship was originally the German vessel SS Imperator, and was given to the Cunard line as part of first world war reparations. 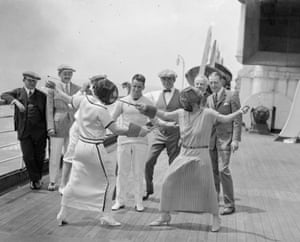 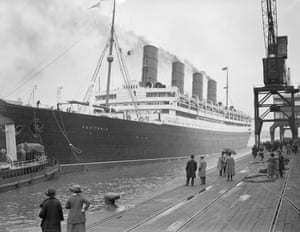 September 1923The RMS Aquitania leaves Southampton on a transatlantic voyage to New York. 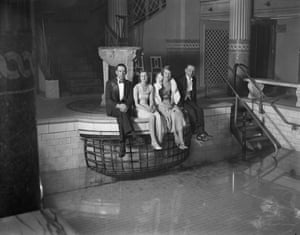 April 1929A group of passengers on the RMS Berengaria leave the party to go and sit by the ship’s swimming pool. 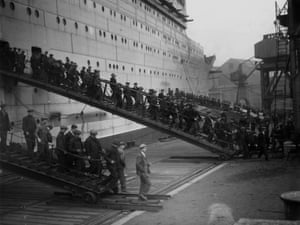 January 1935Some of the hundreds of workers employed on the construction of the RMS Queen Mary at John Brown’s shipyard, Clydebank, leaving the vessel at lunchtime. 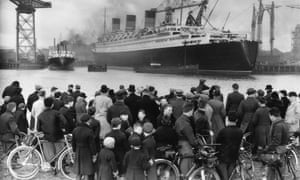 March 1936A crowd admires the nearly completed Queen Mary at Clydebank near Glasgow. It was built with a loan from the government in 1934, granted on condition that Cunard merge with the White Star Line 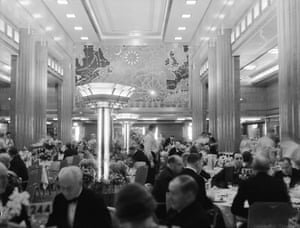 May 1936Passengers on the Queen Mary eating dinner in the luxurious cabin class restaurant during the maiden voyage from Southampton to New York. The radiating light on the map by Macdonald Gill at the far end of the room constantly pinpointed the vessel’s location. 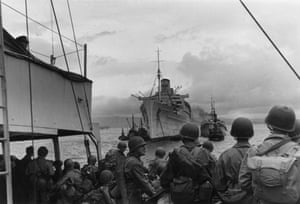 January 1944American soldiers approach the Queen Mary, which served as a troop ship during the second world war. It often carried around 15,000 men a voyage. 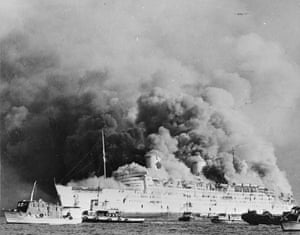 January 1972Smoke billows from the former RMS Queen Elizabeth after it caught fire in Hong Kong Harbour. The water poured on it by firefighters caused it to sink, ending a career which began in 1938. 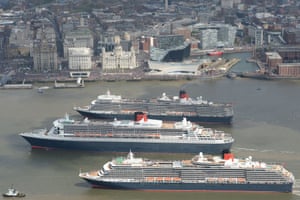 25 May 2015Queen Mary 2, Queen Victoria and Queen Elizabeth meet in the Mersey, Liverpool for a gathering in front of the Three Graces, watched by thousands of people.