First US cruise ship in 50 years arrives in Cuba

A US cruise ship has docked in the Cuban capital, Havana, after sailing from Florida – the first such crossing in more than 50 years.

The Adonia sailed from the port of Miami carrying some 600+ passengers.

Cuba and the US restored diplomatic relations last year. But several Cold War-era restrictions on travelling and trading are yet to be lifted.

The cruise trip only went ahead after Cuba scrapped a ban on its citizens entering or leaving the island by sea.

Cubans waved as the ship arrived and hundreds of passengers stood at the railings taking pictures. 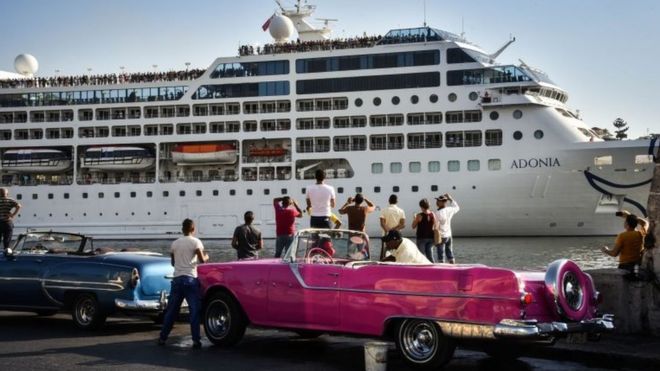 The US company operating the cruise, Carnival, had been given permission by both governments to sail ships between Florida and Cuba.

A Cuban government rule stipulated, however, that Cubans could only enter or leave by plane.

The restriction meant it could not take bookings from Americans of Cuban origin.

The Cuban authorities lifted the ban just over a week ago.

Before the Cuban Revolution brought Fidel Castro to power in 1959, cruise ships and ferries were a common way to cross the Florida Straits.

Since Presidents Barack Obama and Raul Castro announced in December 2014 that they had agreed to mend relations, tourism in Cuba has reached record numbers.

The Adonia will sail every other week from Miami to Cuba, said Carnival.